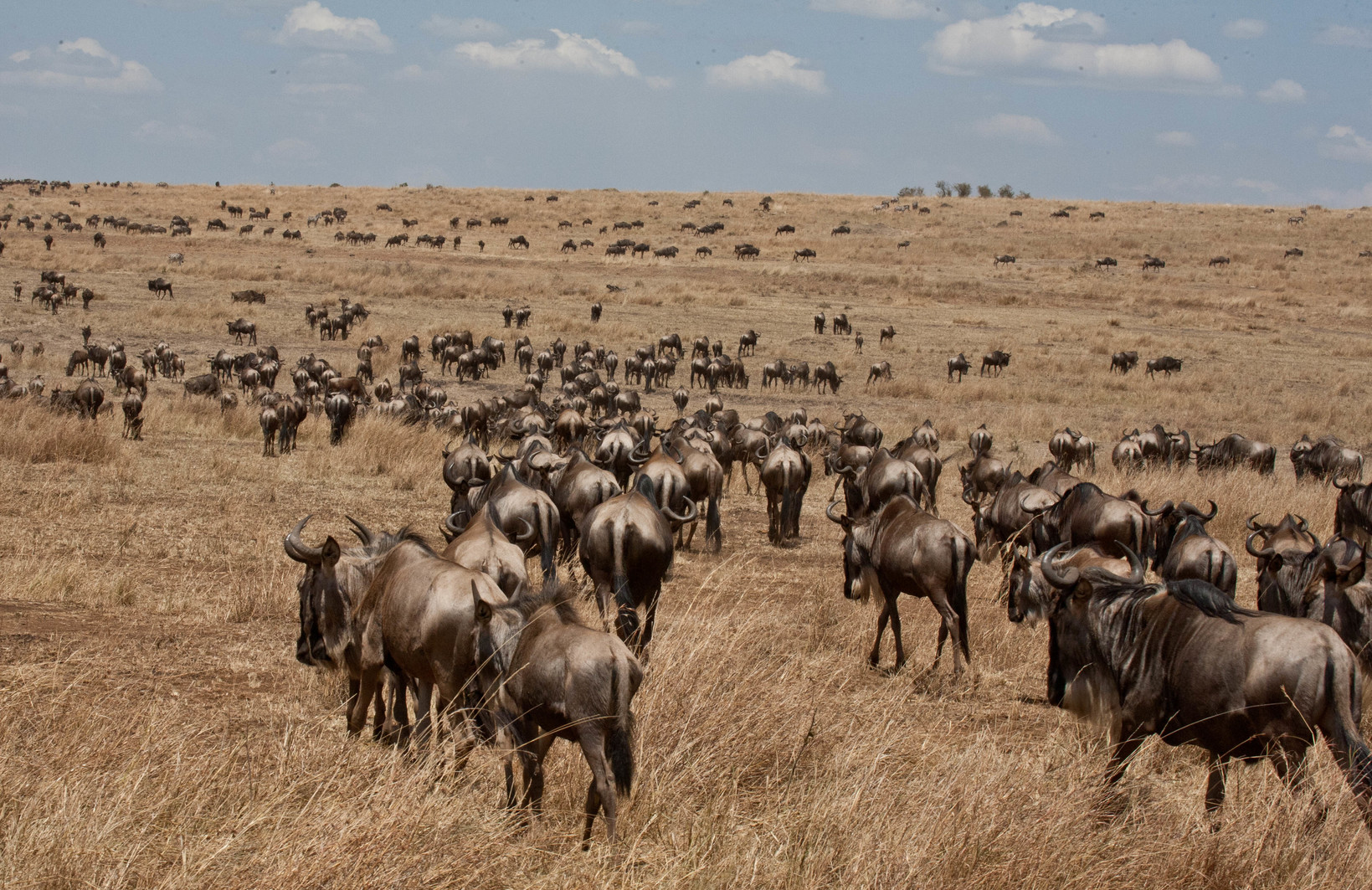 The annual wildebeest migration of herds in Kenya and Northern Tanzania is one of the world's most spectacular wildlife events, often referred to as the ‘Greatest Show on Earth', The Great Wildebeest Migration is a movement of approximately 1.5 million wildebeest and zebra throughout the Maasai Mara and Serengeti ecosystems.

The seasons are reasonably defined: the ‘short dry season’ is typically December to February/March; the ‘long rains’ fall over a six week period from March through April and into May; and the ‘long dry season’ is from June to September, with the two-week ‘short rains’ falling any time from October into November. There are however, no guarantees about these dates.

This is a general description of the migration pattern. The exact timing of the Great Migration cannot be predicted, as it depends on each year's rainy season and other variable factors. CAT Safaris cannot be held responsible for seasonal changes that cause the migration to vary from this description.

Wildebeests and Zebras are Buddies - There are reasons why these two animals migrate together. First, they eat different parts of the same grass. Zebras love to eat the taller grass while wildebeests munch on the shorter ones, thus they do not compete for food.

Second, they got each other’s back - wildebeests have a sharp sense of hearing while zebras have excellent vision, thus they can warn each other of any impending danger.

You can watch the spectacle of the migration on a normal safari or watch it up in the air via a hot air balloon.

December to April: These months find wildebeest and zebra herds scattered across the plains of the southern Serengeti and the northern Ngorongoro Conservation Area in Tanzania. Calving season generally lasts from late January through mid-March, with the largest number of calves born within a two- to three-week span in February. Hundreds of thousands of wildebeest calves are born during this time. Predators in the area take advantage of the abundance of slower calves, and sightings of species such as lions, cheetahs and hyenas are plentiful at this time of year.

May to July: As the plains dry up in May at the end of the long rainy season, the herds begin to move westward and then northward in search of greener pastures. The scattered herds eventually gather to form columns up to 25 miles long as they begin their trek from the south to the western and northern Serengeti. Predators, which are territorial rather than migratory, hunt as the massive herds pass through their terrain. Mating season for wildebeests also occurs during this time, between late May and early June. As the herds of zebra and wildebeest make their way northward, they must cross the Grumeti River, where hungry crocodiles wait for those that stumble. The best time to see this migration in action in the western and northern Serengeti is in June and July.

July to November: As the plains of the western Serengeti dry out and the grasses are depleted, the migration must continue. Between July and mid-August, the wildebeest, zebras and gazelles leave the Serengeti and Tanzania, cross the Mara River with its own population of crocodiles, and head into Kenya's Masai Mara, where lush green pastures await. A visit to the Masai Mara National Reserve when the migration arrives in August or September can make for an unforgettable experience due to the variety of species and the sheer number of animals. The herds scatter around the abundant grasslands of the Masai Mara until October or November, when the start of the short rainy season prompts them to begin their journey south, back to their breeding grounds in the Serengeti and Ngorongoro Conservation Area.

In January and February the wildebeest cows drop their young in a synchronized birthing that sees some 300,000 to 400,000 calves born within two to three weeks of one another, eight and a half months after the rut. The birthing occurs on the short-grass plains that, at the southernmost extent of the wildebeests’ range, spread over the lower northern slopes of the Ngorongoro Crater highlands and are scattered around Olduvai Gorge. Here, at the ‘cradle of mankind’ many notable fossil finds have been discovered, including some that show that wildebeest have grazed the Serengeti almost unchanged for over a million years.
A newborn wildebeest gains co-ordination faster than any other ungulates and is usually on its feet two to three minutes after birth. It can run with the herd at the age of five minutes and is able to outrun a lioness soon thereafter. Notwithstanding this, many do die within their first year, from predators (although research indicates only about one percent die this way), malnutrition, fatigue or disease.

We can customize safari packages that will let you experience the best of the migration.

Come and watch as millions of wildebeests, zebras and gazelles make the annual trek from Tanzania's Serengeti to the Masai Mara in Kenya in search of pasture and water.

Sorry, no bookings are available.